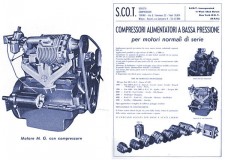 For those of you that inspected the S.Co.T. (SCOT) or otherwise known as Italmeccanica supercharger at the last meeting, here are a couple of old promotional photos:  Engine |  (Product page  — one of the family of blowers and the other of one mounted on an MG engine.

As for the MG application, it would appear that the issue of belts had not been resolved at the time of that shooting. They show an SU but the one on hand has a Solex carb. After dissecting the Solex, it is a straightforward, old-time carbureter without proprietary/obsolete diagrams, needles, gizmos, gadgets. I can’t wait to bead blast it and adapt it to Linda’s supercharged TD and check it out on the road. The single SUs drop off very lean at highway speeds and have been disappointing.

The SCOT blower will be freshened up and mounted on the 50 TD’s original 1466cc overbored engine (with Moldex billet crank?) and test run on an engine stand in the near future. It isn’t out of the realm of possibility we could test run that engine at Brass Pointe.

A rare glimpse at the factory floor at Abingdon.    (Click on Full Screen icon for optimum viewing.)