Besides the well known sports cars, MG also produced a larger, more family-suited series of cars, known as the SA, VA, and WA. Three body styles were offered in each of the series, Saloon, Tourer, and Tickford.

The SA Tickford, along with the SA Saloon, are the largest MGs ever built. These luxury cars were intended not for motorsport as such, but rather the gentle British road rallies of the time, especially in the Concours D’Elegance which concluded many of these events. MGSA Tickfords competed very well, and MG was quick to promote this success.

Salmons & Sons (founded 1830) were responsible for the custom coachwork along with the manufacture of the ‘Tickford’ folding hood (top) from which the model gets its popular name. (“Tickford” still exists to this day as a division of Aston Martin). The top can be used in 3 different positions: closed, coupe de ville, and fully open (top down). The “Tickford” mechanism, with its ‘S’ shaped pram-irons (landau bars), made folding the top effortless.

Unique features for SA Tickfords include: a windscreen that folds out to provide additional air, hydraulic jacks at each of the wheels, controlled from the inside, which allow the car to be elevated from the ground either front, back, or both, leather & English walnut trimmed interior with brass instrumentation, trafficators (turn signals), and a chassis central lubrication system.

Patience and time is the key to working on cars like SA2333. Often, a car goes through many previous owners on the road to restoration, and SA2333 is no exception. Fithian Wilbert, of Ohio, took the car apart in 1968, assumed room temperature in 1975, and I eventually became the owner in 1978.

This car took thousands of “fun” hours to restore. The majority of the work, including wood, bodywork, paint (single stage urethane), and mechanical, was done by the owner, to the highest standards of originality possible. Advice from SA owners around the world helped tremendously on the details.

Just 57 MGSA Tickfords are known to survive, and this is one of them! 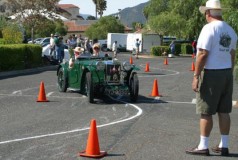 What is a “Safety Fast” Funkana?

At GOF Central 2011, MGs will have a chance to actually get out of 2nd gear in a competitive event on an actual race track! Yes, you actually may hear squealing tires!

The course is a roughly ¼ mile asphalt oval track, (view track) with some interesting ‘tweaks’ added to make the event interesting and safe. It can be driven alone, or with a navigator; your choice. The fastest time wins.  Horsepower does give an edge, which is why there will be two classes, one for MGs up to and including 1955, and another for MGs 1956 and later.

In addition, each class will be divided into “rookies” and “vets,” as picked by the driver at the event registration. However, other skills do affect your time as well. Registration is near the water tower.

Let’s take your MG through the course.

You notice the starter holding a checkered flag, waving you to the start/finish line. The flag drops, the clock starts, and you are off, quickly moving into 2nd gear as you immediately enter the pylon balloons and round the first turn. You maintain speed, even hit the brakes, swerving either left or right to weave through them, break one, and time (10 seconds) is added to your run. They seem to go on forever down the back stretch. Finally, you apply the brakes as you enter a “garage” at the 3rd corner. You back out of the garage, and continue backwards, (avoiding pylons) and back into another garage near the 4th turn. You pull out forward, hit 2nd gear, swerve through more pylons on the home stretch, and slam on the brakes at the finish line.

Expect some tire noise! The two foot wide finish line is where your front tires must be stopped to stop the clock. Go too far? Back up and stop!

Now you can relax a little; the timer is off. Let your heart slow down a bit, the fast stuff is over, but other skills now come into play. That is why it is a “Funkhana.”

Look over your shoulder, back up, and parallel park next to a designated curb. One chance to back in only—no pulling forward, no time limit. Anything within 6 inches of the curb (both tires) is “no penalty.” For additional inches away, (farthest tire) add one second per inch or partial inch. Hit the curb, add ten seconds to your time. Prewar and right-hand drive cars have a definite advantage here! Once parked, you will be handed 3 “pub” darts. Toss these at a bullseye target marked 1-10.  Your dart score is converted into seconds off your time.

You are done! Pull forward and exit to the right, park somewhere and watch the rest of the field compete.

Volunteers needed for this event include: 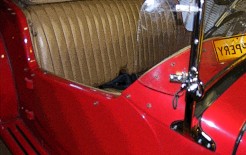 Winners will be chosen by popular vote at the GOF.

The Clarion Hotel is located off Interstate 94, halfway between the cities of Detroit
and Chicago in Kalamazoo. The hotel is close to the Gilmore Car Museum, AirZoo, Western Michigan University, downtown Kalamazoo, and Peterson & Sons Winery.

Team distance driving award to the Club with the most MG miles driven to the event.

The object of the award is to encourage the preparation and driving of all MG’s in the long distance driving tradition of Paul Johnson.  Paul was an ardent supporter of GOF Central and the award  is also intended to promote the attendance of GOF Central by members of all GOF Central Clubs even though it may require them to make a long journey and to encourage owners of older MG’s to drive them to GOF’s.

The award will be made on the basis of miles driven to GOF Central in an MG by members of a MG Club that is a member of GOF Central.  A traveling trophy will be awarded each year to the winning club, with the club being responsible for engraving its name and the year on the trophy.  Members of the winning team will also receive individual awards recognizing their participation in the team winning that year’s Johnson Trophy competition.

The following rules will govern the Johnson Trophy competition:

Each Club will designate a leader for their team who will be responsible for gathering name, mileage and car type driven for each of their participants and submitting it to the person responsible for the award at GOF Central (Suggested form for this is attached).  Information may be supplemented by that person up to the cut-off time designated by the Host Club (suggested time not earlier than noon of the day of the Awards Banquet).  The Host Club will total the points for each Club on the basis of the information submitted by the designated person of each Club. Presentation of the trophy to the winning team will be made at the Awards Banquet at each GOF Central.  Club winning the trophy will be responsible for engraving the trophy and delivering it to the Club sponsoring the next GOF Central in time for presentation at their event.

Download rules and team scoresheet as a Word file or PDF file. 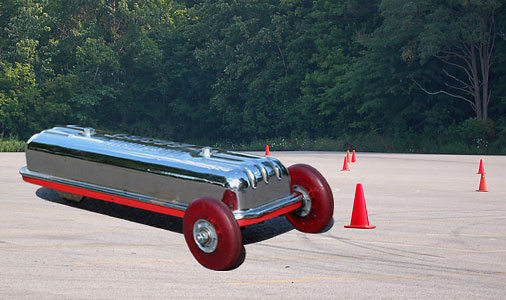 Valve/Rocker Cover Racing is a regular event at GOF Central meets.
Get your MG cover ready to rocker and roll!

Logo will be embroidered

Please pre-order as a limited selection of shirts will be available on site.

We will be reducing our room block on July 14 to avoid paying for unused rooms – don’t miss out on our room rate!

A rare glimpse at the factory floor at Abingdon.    (Click on Full Screen icon for optimum viewing.)